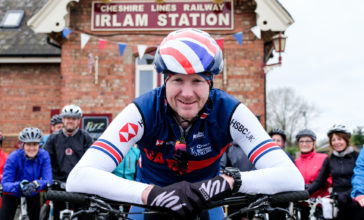 As part of the Station Park opening event on 21st March, Hamilton Davies Trust (HDT) included a cycle ride from Media City to Irlam Station to promote cycling as an alternative to driving. The ride was supported by British Cycling and double World Champion Paralympian cyclist, Jon Gildea, who took part.

Jon and 17 other cyclists gathered outside the ITV studios to start the ride where the paralympian set the riders off on their 12 mile cycle to the station.

On route they stopped off at the A J Bell stadium for a quick break where they were met by Salford Reds Foundation and players. After a quick lap of the stadium on their bikes the cyclists continued on their way to Irlam Stadium.

Less than 2 hours after leaving Media City the cyclist arrived at the station in good time for the park opening, welcomed in by cheers from other invited guests.

After securing their bikes in the station’s cycle hub, the cyclists then joined over 130 other guests, including the Lord Lieutenant of Greater Manchester, Salford City Mayor Paul Dennett and HDT Chairman Neil McArthur, as they officially opened the new Station Park to the public.

Cyclist Duncan Brickhill, Chairman of Cadishead Sports, said: “I thoroughly enjoyed the ride and was pleased to asked to be part of the celebrations.”

Following a stroll in the park and a chance to see it’s many quirky and enchanting art pieces, the cyclists enjoyed a light lunch at Station House before heading off on their journey home.

The cycling element of the Station Park event continues to build on the momentum generated by the official launch of the Irlam and Cadishead Cycleway, which was opened by Chris Boardman last year and aims to support the Greater Manchester Combined Authority’s ‘Made to Move’ strategy, which encourages people to walk or cycle short journeys, rather than drive..