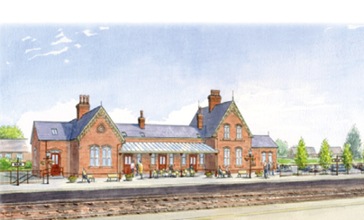 The redevelopment of Irlam Station house is moving full steam ahead!

Planning permission was granted on the 15th May and the application for a licence was recently submitted.

• A waiting room
• New toilets
• Office space
• Managers flat, which will provide extra security with someone on site at all times
• Station garden
• FREE 60 space car park, complete with CCTV and secure cycle parking
• Enhancements to the surrounding environment

Salford City Council have also successfully bid for funding to create a new step-free access route to the Liverpool-bound platform.

The progress of this redevelopment is thanks to the great partnership working between the Irlam and Cadishead Regeneration Group, Salford City Council, Hamilton Davies Trust, Transport for Greater Manchester, North Cheshire Developments (NCD), Network Rail, National Rail and the Friends of Irlam Station who have combined resources to give the station and its surrounding approaches the makeover they badly deserve.

The whole project will provide a much needed high quality venue for local people of all ages, which will be an asset to the area.

Local people and rail users have expressed their support for these exciting proposals, which have been fully discussed at the Community Committee meetings.

Councillor Roger Jones said “I fully support these proposals and I am delighted with the partnership working, which will ensure that this scheme is delivered by mid-2015.’’

Councillor Tracy Kelly said “These are much needed improvements to one of Greater Manchester’s busiest rail stations.’’