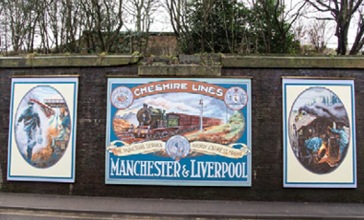 This is the latest major piece of work by local artist Rachelle Cleary as part of our I C Art programme to bring urban art to Irlam and Cadishead. The work is part of a wider embankment project to improve the aesthetics of the area.

The three pieces that comprise Cheshire Lines tell the story of the Manchester to Liverpool railway line that runs through Irlam.

The central picture celebrates the opening of the line in 1873, with the two city crests of Liverpool and Manchester in the top corners. Competition for passengers in those days was fierce, hence the slogan ‘Punctual services, hourly express trains’ and the painting showing a steam locomotive speeding between the North West’s two great industrial cities.

The left hand painting is a scene at Irlam Station during the Second World War, with the train full of servicemen waving goodbye to their loved ones and two evacuee children waiting to travel to the safety of the countryside during the ‘Blitz’.

On the right is an image of the footplate of a locomotive as it climbs the gradient to the canal viaduct with the Steelworks on the right.

Neil McArthur, HDT chairman said: “This is a stunning piece of urban artwork that really brightens up the area. If you want to know more about our community’s railway heritage, the Cheshire Lines story is told in Irlam Station House along with many other aspects of our local history.

“Rachelle has been working on the Cheshire Lines piece for several months down at the HDT Art Centre in Cadishead and more art, plus work on the embankment, is expected soon.”

Neil added: “The I C Art programme aims to create engaging artwork at sites across Irlam and Cadishead. We believe this helps local people to connect to their heritage, as well as celebrating the present and looking ahead to a positive future.”